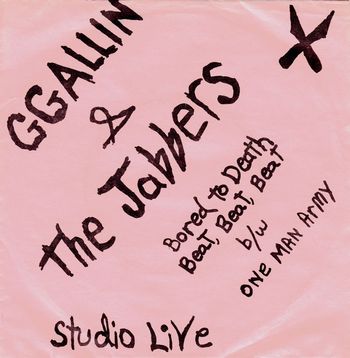 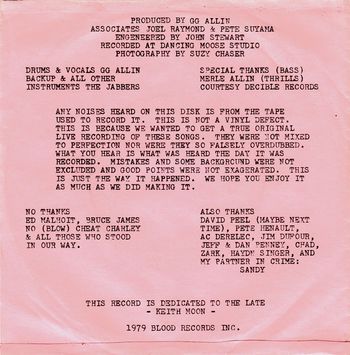 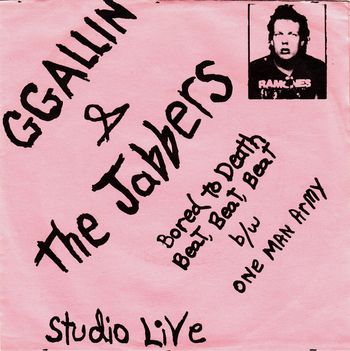 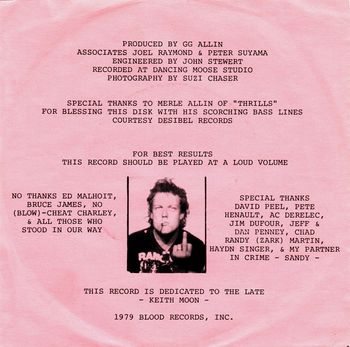 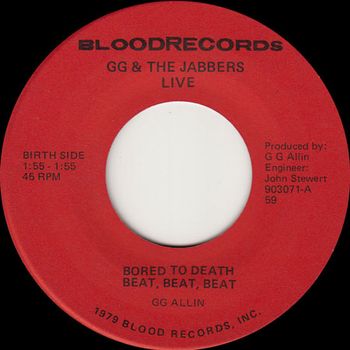 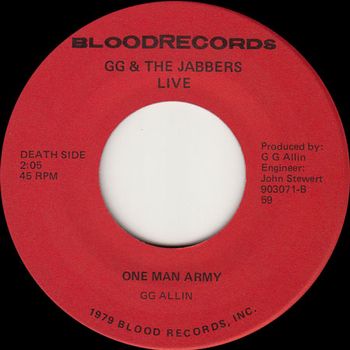 Twenty-one year-old Kevin Allin (drums, vocals), his brother Merle (bass), and local guitarist Peter Henault assault the reel-to-reel in 1978 with some Iggy-cum-Ramones inspired basement punk rock. These three tracks were recorded in the early winter months of ’78 during a blizzard — with the band braving a five-hour road trip from Vermont to Dancing Moose Studio in Cherryfield, Maine. Resurrecting his childhood nickname and shedding the backseat skins role for frontman duties, GG initiated with this debut a barrage of tasteless tunage and self-promotion that would fester and multiply for the next 14 years. Self-released over a year later in mid-1979 on his own Blood Records label in a likely edition of 500 copies, this remains one of the two most elusive GG singles. To add insult to injury, two sleeve variations exist. The first sleeve contains two crossed knives on the upper right corner, and no graphics on the back, just typed credits. The second version replaces the knives with a small photo-booth shot of a young GG sporting a Ramones t-shirt, and the back is graced with a picture of GG giving the finger (from the same fruitful photo-booth session). The paper stock on this version matches the sleeve on the next single, “Cheri Love Affair,” leading me to believe that he probably made up a new batch of sleeves (adding his photos) around the time “Cheri” came out. Seeing as the covers were all cut, folded and glued by hand, I’m guessing he didn’t re-press the single; rather, he most likely didn’t create enough for the entire pressing first time around and needed to whip up some more.

After cutting this single, GG assembled a band in order to play out live. Since Merle moved to Boston in April 1978 to play with The Thrills, GG recruited childhood buddy Alan Chapple for bass duties. (Alan also proposed the name “The Jabbers,” as they used to call people “butt jabbers” as an insult.) Chapple stuck with “Kev” through the entire Jabbers career and also appeared on the “Live Fast Die Fast” single. Guitar and drum slots remained in heavy rotation.

“I was listening to stuff like Wayne County, the Fugs, the MC5, the Mothers Of Invention, and I thought, “Let’s start this fucked up band and break shit and rip girls’ clothes off and stuff,” and I did it as a gimmick, a joke. I thought I’d give up after about a year and laugh about it later.”
— Conflict #43 (Jan/Feb 1987)

“This is pure junk, I mean punk, so raw you’ll think your stereo’s broken. Not an inkling of intellect, talent or innovation is on this record. The lyrics are dumb and offensive. We recommend it.”
—Boston Rock review (Jan/Feb 1980) 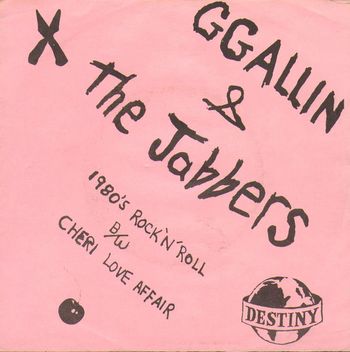 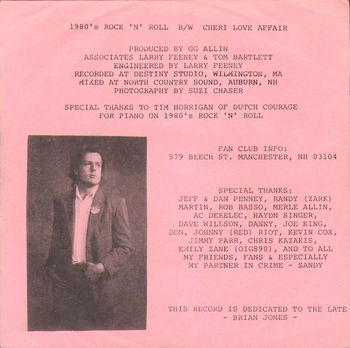 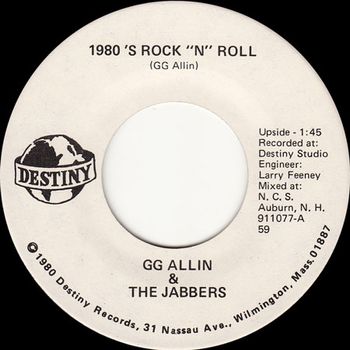 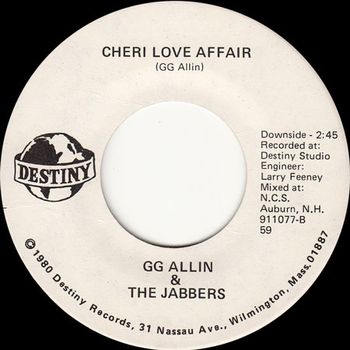 In Fall 1979, GG called up Malpractice guitarist Jeff Penney and his brother Dan to teach them a couple of tunes he wanted to record. The trio ventured down to Destiny recording studios in Wilmington, Mass., and banged out “1980s Rock And Roll” and “Cheri Love Affair” (written by John Fortin) with GG on drums, Jeff Penney on guitar and Dan Penney on bass. Tim Horrigan, from local pop band Dutch Courage, was working in the studio and joined the crew on piano on “1980s.” Destiny was a recording studio run by Larry Feeney which offered package deals: record your tunes and have them handily pressed on the Destiny label all for one low price. As a result, the Destiny discography is quite, um, eclectic, with only one true punk record — and it’s not even GG’s! (Alas, that honor goes to Genral Foodz.) The existence of “1980s Rock And Roll” can only be justified as a bizarre attempt for commercial airplay. I mean, how can you keep a straight face when there’s lines like “Come on along it’s a rock and roll party / Bring all your friends and don’t be tardy”? I’ve a hunch this tune never made it to the clubs. On the other hand, “Cheri Love Affair” swaggers and struts with a cool Dolls/glam vibe.  At the very least, this record is essential for the sleeve alone… with GG looking uncharacteristically cleancut and suave in his button-down shirt and sportscoat on the back cover! Again, the educated guess is a 500 press, and judging by the scarcity of the disc, I wouldn’t be surprised if an embarrassed GG didn’t toss a chunk of them himself a few years later.

Nerd Note: Though the label states copyright 1980, the matrix number on the label points to a November 1979 pressing. Most likely it was sent off to the plant with the copyright reflecting that it actually would be released in early 1980. 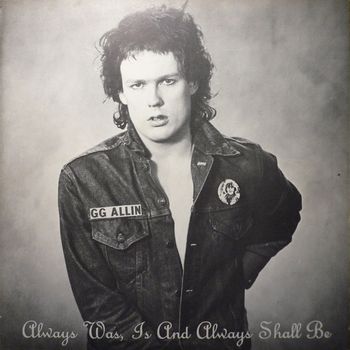 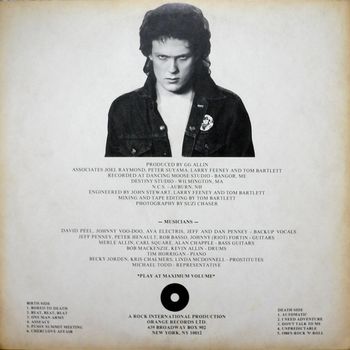 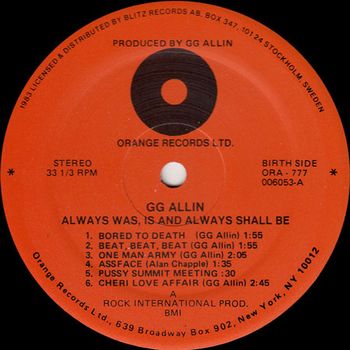 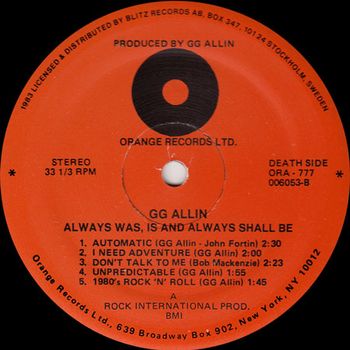 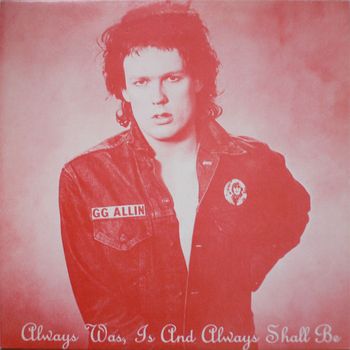 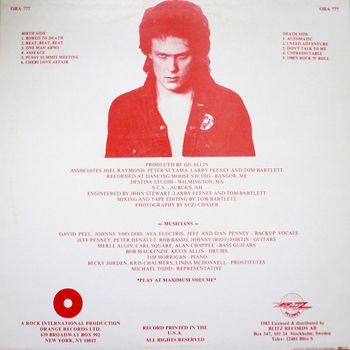 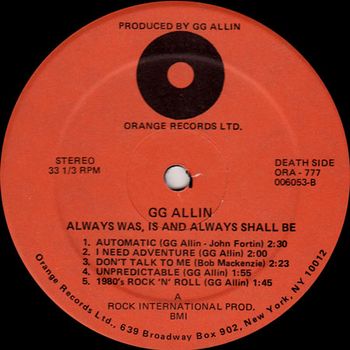 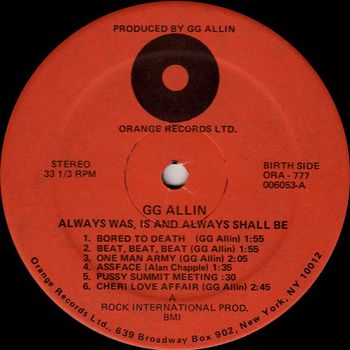 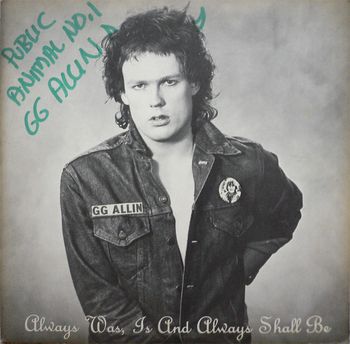 Always Was, Is and Always Shall Be

GG’s debut album marks the beginning of his 1980-85 stint on David Peel’s Orange Records label. (It’s interesting to note that on the first 45, Peel is thanked with “maybe next time,” so apparently the two had discussed recording for the label from the beginning.) The Jabbers — which at this time included Carl Square and Bob Mackenzie from Boston band the Mighty Ions — had recently recorded five tracks at New Hampshire’s N.C.S. (North Country Sounds) studios. One of these, “Don’t Talk To Me,” was a Mackenzie original that GG kept in the set even years after the two Ions split later that year. The production quality was much better on these newly recorded tracks (“Assface,” “Automatic,” “I Need Adventure,” “Don’t Talk To Me” and “Unpredictable”), and it’s too bad the band didn’t bang out a handful more while they were at it. At barely 25 minutes and containing only five new tracks, the debut LP could have been more impactful.

Apparently the album was originally credited to GG Allin & The Jabbers, but GG changed the artwork from its band-photo cover to the “teen idol” shot (as Merle referred to it), nixed the Jabbers from the band name and may have even turned up his vocals in the final mix, all unbeknownst to the band. A diehard music fan fascinated with meeting famous people and collecting autographs from his favorites, GG also seemed enamored with being famous. By far, more copies of “Always Was” pop up with GG autographs and ramblings in the upper left hand corner than without. Some copies contained various hype sheets and gig flyers as well.

The album’s title is not so much a proclamation of the punk rock and roll contained therein as it is GG literally announcing his identity: Kevin always was, is and always shall be GG, he felt, and within a few years he would completely morph into his alter-persona and spend the rest of his life making sure everybody knew just who he was, too.

The album was first reissued in 1983 by Blitz Records in Sweden (which is actually one of the first in a long line of mysteries & false leads of brainchild Peter Yarmouth of Black & Blue Records, according to Yarmouth “GG wanted to reissue the album on his own because the Jabbers had paid for the studio time & record pressing then gave Peel control of publicity & use of his Orange Records for cred but withheld all payments from sales and gave the band copies of the record instead. So GG wanted it reissued but I felt nobody would care about a record issued out of Rhode Island so we pressed it as a fake Swedish release”. The album featured red artwork near-identical to its black-and-white predecessor. Later Peter Yarmouth reissues the album on his Black & Blue label and packaged the LP along with most tracks from the subsequent three singles.

“The album was kinda half-assed, we just wanted to get something on vinyl, just to have something out that we could work off of.”
— Conflict #43, Jan/Feb 1987 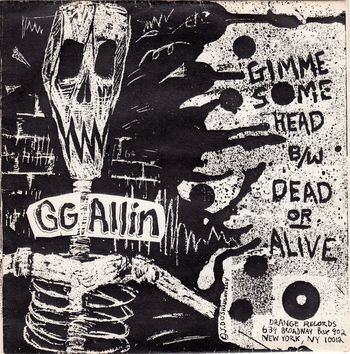 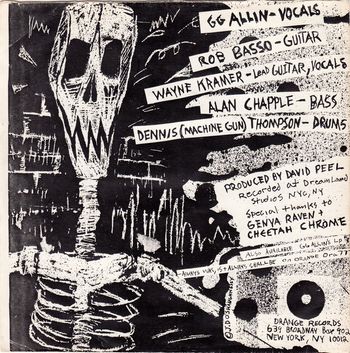 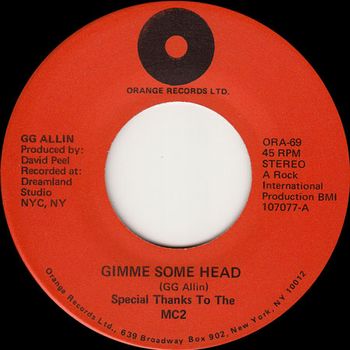 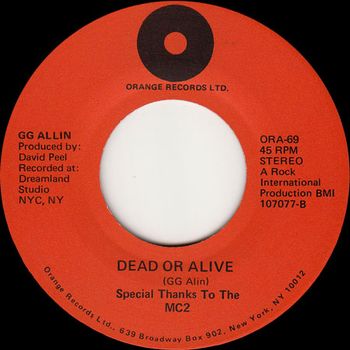 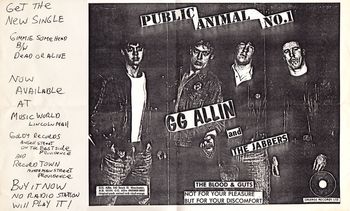 Through David Peel’s matchmaking, GG’s next outing featured two big names: the MC5’s Wayne Kramer on guitar and Dennis “Machine Gun” Thompson on drums (credited as the MC2 on the record label - although Thompson’s drum tracks would be dumped prior to pressing, in favor of GGs, as was the case from this point on). GG must’ve been pumped to rock out with two of his adolescent heroes, and the resulting studio effort is arguably his finest recorded moment. “Gimme” was an early live show staple which GG would introduce by asking “How many girls out there like to suck cock?” and demanding a show of hands. “The guys need to know who to take home tonight!” (Judging by the live tapes I’ve heard, the female attendees weren’t too eager to divulge this information.) All indications suggest this was the best-selling GG release back then — in the couple-thousand ballpark — with the Kramer/Thompson association no doubt adding legitimacy to a relatively unknown performer. *Note: Although John Fortin played on all tracks his name was dropped from the credits by GG, who decided he’d rather credit Wayne Kramer as the second guitarist than have 3 guitarists listed. A year earlier Fortin saw he was not credited with writing Cheri Love Affair on the EP and again having his name dropped from the credits he had enough and quit the Jabbers at this point.

The session also produced a third track, “Occupation” (a.k.a. “Occupational Hazard”), which lay buried until the late-1990s when it was bootlegged. It’s too bad this song never appeared during the Jabbers’ heydey, as it’s a great snotty Stonesy garage punker with the hallmark Wayne Kramer noodling. And it’s notable, as with “Dead Or Alive,” as one of the few curse-free GG cuts. *Note: this song will finally be released on the Jabbers new official Blood Orange label in March 2019. 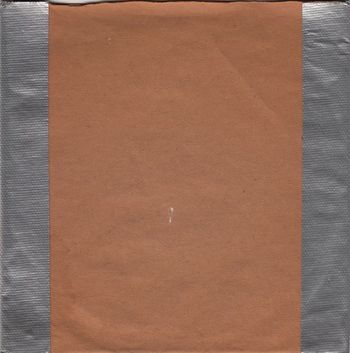 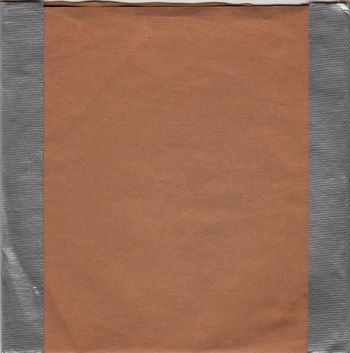 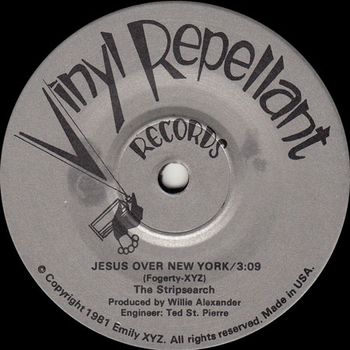 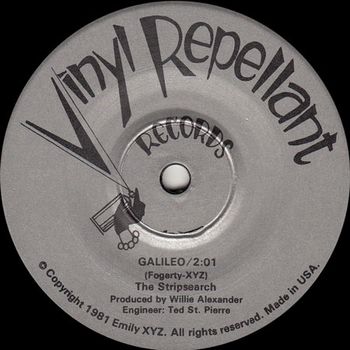 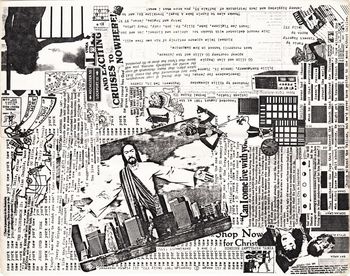 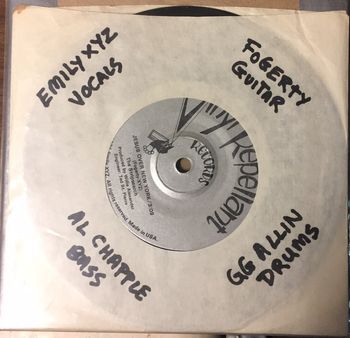